The Trailer for the AVGN Movie is coming along pretty good and will be ready by November. Before it hits the internet, I wanted to give fans a special chance to get a sneak peek on the big screen before it goes online. For the occasion, we’ve rented the Colonial Theatre in Phoenixville, Pennsylvania. That’s right, the same theater where The Blob was filmed!

I’ll be there to host the screening. I’ll show two past AVGN episodes, the Movie Trailer, some behind-the-scenes images and then open up a Q&A session. After that, I’ll be available to sign autographs or shake some hands. I’ll try my best to get to as many people as possible. (I’ll also be doing a signing at RetroCon on November 11.)

AVGN Movie Trailer Premiere
Friday, November 9, 2012
6:30pm
The Colonial Theatre
227 Bridge Street
Phoenixville, PA 19460
Tickets $15
Tickets can be purchased online here. You must have a ticket to enter.  Tickets are limited and are general admission – meaning seats are first come first serve. Parking is not available at the Colonial Theater.
This is an “R” rated event (for language), so those under the age of 17 must be accompanied by an adult. 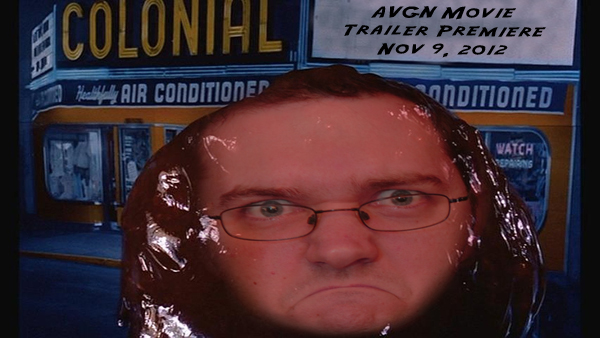 We are trying to add a west coast date as well. Stay tuned. If you can’t make it, don’t worry, it will go online in November, some time after the event. It won’t be like the new Godzilla teaser where it screens at Comic Con, then disappears into oblivion.

Also, this does not mean the movie is close to being done. There’s still a lot left to film. It’s a long tedious process. I wanted to focus on getting the trailer out first, because I think it’s about time to show something. Then I go back to working hardcore on the actual film.