Mrs. Nerd on “What it was like making the AVGN movie?”

Living as publicly as James and I do, compounded with the perplexing nature of our “jobs”, we’ve gotten used to the constant barrage of questions and general bewilderment of the people we meet. It’s completely understandable and expected. We both have an arsenal of stock answers to help make what we do more comprehendible to the general public. That is until “What was it like making the movie?” entered our lives. Ugh, what a loaded question. Never have I had so little to say about something that so many people are eager to know about. I think it is largely because there are not words in the English dictionary to fully describe what it was like. I pride myself on being fairly eloquent and able to properly express sentiment, but this whole experience has me reverting back to single-syllable, toddler-like responses. A reflex is triggered and out pop words like, “good”, “nice” and “big.” “Big?!?!” What does that even mean? Still, as I sit here writing this, all I can do is string together adjectives that begin to resemble the physical, mental and emotional roller coaster that was the past four or more months…

Clearly my approach isn’t working and I eventually give up trying to come at it from my perspective alone. It’s not only seemingly impossible to answer on my own, but it’s also kind of unfair. It was such a collective experience. So many people came together to make this movie happen, so why not answer it together? That’s when I decided to interview the cast and crew who worked on the film. I also broke that big scary monster of a question (“What was it like making the movie?”) into more manageable pieces. Still, it’s just a start. You have to know that this is just a taste of the entire experience but hopefully this helps to shed some light on it. That said, I’d like to thank those who shared their stories and every last one of you out there for your undying support. Enjoy!
-Mrs Nerd 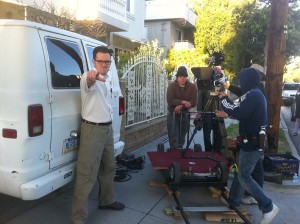 What was the funniest thing you can remember from being on set of AVGN: The movie?

“Well, we started filming on April fools day…so there were a few attempts at pranks but everyone was too on guard for that… There were a lot of laughs on set, but one that sticks out was watching producer Sean’s reaction when he was told that a skunk snuck into the green screen studio and wasn’t budging from it’s hiding spot. He was convinced it was a prank (it was not) and was trying really hard not to fall for it. He eventually dealt with the skunk before it caused any issues, but it was pretty funny to watch.”
-Mary Scholz (Directors’ Assistant/Extras Casting)

What was the hardest/most frustrating part of the job?

“The desert. Shooting in the heat and sun is always hard and trying, but this particular location was extra difficult. We had hot sunny days, dust and sand, and incredibly strong wind. I am no stranger to working in the desert. I have done so on many occasions. I thought I would be prepared for this, but it was grueling. When the wind kicked up, it was impossible to talk to people more than a few feet away from you. We lost props, tents, food, and many set pieces to the wind. The sand and dust was blinding and coated everything. And while it wasn’t overly warm temperature-wise, the sun and it’s reflection off the sand made quite a few people sick.”
-Brandon Amelotte (First Assistant Director) 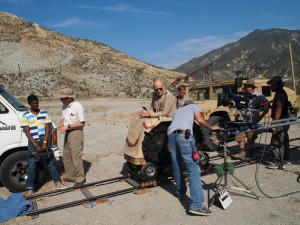 How were James and Kevin as first time feature directors?

“First off, this project is very ambitious. Most folks come out with a super talky narrative or some shit for their first project. Nope. These guys come out with a relatively epic project with something like 200+ VFX shots. They were troopers, though. They pushed through all the obstacles with minimal scrapes and scratches. I look forward to working with them again.”
-Grover Richardson (Visual Effects Supervisor) 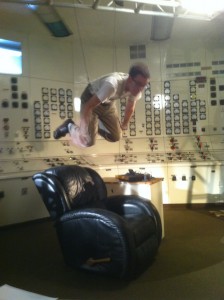 How did this experience compare with other films you’ve worked on in the past?

“AVGN was a pure passion project, it was exciting to see James live out his dream. There was a lot of improv on set which was amazing. The crew working on the project were all fairly young and did an amazing job putting it together.”
–Bethel Teshome (Production Assistant) 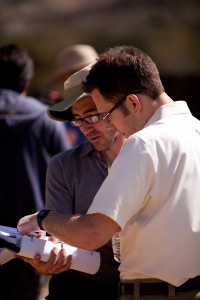 How did you (personally) come to work on the project?

“My trip to California was certainly a colorful one. I have been a fan of James’s work for the past 6 years and I had also been trying to break into film. When the post was made on the site that they were in need of prop makers/miniature builders I immediately jumped at the chance. I sent some videos of my proton pack, scarecrow glove, and a few other things I have made to the address provided. To my surprise I got an email back saying thanks and I’ll be on the list. 3 or 4 months went by without word then I got an email simply asking “would you like to come to California to work on the AVGN movie” to which I responded with an abrupt “HELL YEAH”. I put my job on hold and took a completely self-funded trip from Philadelphia to California for a month and a half. It was a dream come true to not only be working on a film in LA but for it to be the AVGN movie. During my stay I made many friends and learned a great deal about the business while I was there. There were extreme highs and lows but when all is said and done, I would do it again in a heart beat.”
-Jon Giancola (Art Department) 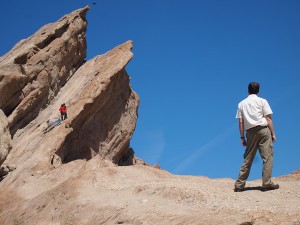 What inspired you the most on set?

“The thing that inspired me the most on set was the fans. I had never heard of AVGN before this, but seeing how supportive, and friendly they were was amazing! I did research before filming by watching the web series, reading fan comments, and other internet searches for gamer references I did not know about and I even reached out to fans to ask them questions and they were so resourceful. I got a few tweets while filming and to hear how much they liked the costumes was great. I’m taking a risk and really putting myself in a position to be criticized by coming into something with such a big fan base already. But I have gotten nothing but positive feedback that I have interpreted the characters correctly. Thank you so much to the fans for being so supportive and friendly!!”
-Layne McGovern (Costume Designer) 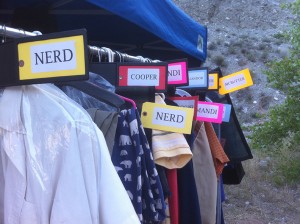 What was your most inventive, problem solving?

“… we were on location in the dessert and were inflating this giant, oversized, 8 foot tall beach ball which takes almost an hour and a half to inflate because of its size. I had tied a rope to it near the cap to ensure it would not go anywhere. Right when it was in the last few minutes of being finished a huge gust of wind blew threw the valley of the canyons, the ball started pulling and I was holding on with all my might so the ball would not blow away. I was getting dragged through the sand as behind me everyone was trying to save production tents from being flipped over. A second later the rope broke and the ball started falling off the canyon. Without even saying cut the whole cast and crew stopped mid-scene and just watched and laughed as the giant ball fell of the canyon side. I was more worried that it would make it over the second canyon and onto the road so I jumped in my car and raced down the canyon side to see if I could find it. I made it to the crew parking lot about a quarter mile from location at the bottom of the canyon. The PA’s directing parking told me they did not see anything, which was confusing to me. I climbed up to the end of the second canyon and looked down at the road and the valley. There was no sign of the beach ball. About a quarter mile down the road I did see a pick up truck pulled over on the side of the road. I decided to make that walk to see if that’s why they were pulled over. As I approached the truck I noticed that there was a ditch with a tree in it and right next to that was the ball and was a family taking pictures in front of it. I asked them if everyone was ok. They were fine and told me that it didn’t go into the road. When they turned the corner they noticed a giant beach ball just fall off the canyon in the middle of the dessert and didn’t know what to think about it. They continued on their way and I continued to drag this giant beach ball a quarter mile up the road to the parking lot in the crazy wind. When I got to the parking lot I was able to get a ride with it back to the location. When I got back I was greeted with a round of applause from the cast and crew. After that I tried to make sure that that evil beach ball was never used again. But unfortunately for me the next day it was requested to be used again! Luckily the second time went a lot better then the first.”
-Michael Trudel (Art Director) 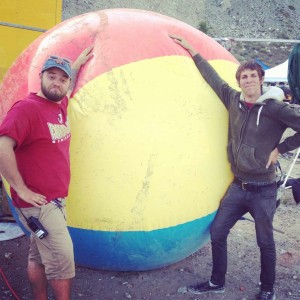 How would you describe the experience of working on AVGN: The Movie overall?

“Love was ever-present on set. Mr. Nerd, along with his loving wife, Mrs. Nerd, and his two best friends from high school by his side, Mr. Finn and Mr. Keegan, formed a solid foundation of trust and compassion, upon which the entire staff of the film could then build a larger structure of faithful camaraderie. Magick happened not only in front of the camera but behind the scenes, thanks to the dedication of such stellar companions. Hollywood is now forever changed for the better, because it hosted this project of passion that truly stems from the heart, as evidenced by the support of the thousands of dedicated fans who have been advocating this film since its announcement.

In a foreign place like Hollyweird, where all the beautiful people flock, I expected to be the ugly duckling, but thankfully, the Nerd and his super hero friends created a safe and magickal force field around us crew and cast members, which protected and shielded us from the chaotic depersonalization of Tinseltown. This kind of magick can only be conjured by the most honest of spirits, and I am extremely blessed to have been surrounded by the good vibrations of this awesome group!

This will be one of the greatest movies ever, not only because it stars the most bodacious, most triumphant Nerd we all adore and admire immensely, but also because it exudes with unconditional love. Every single person who walked onto set contributed a piece of his heart and soul to this project, and we joyously did so for the Nerd, because the Nerd has generously done so for us fans all these years, never once requesting anything in return.

Peace and love to ALL of you out there, cast, crew, and fans alike, for making this totally tubular dream come true. Your shining excellence has forever brightened by life.”
-Wendy Wayne (Art Department) 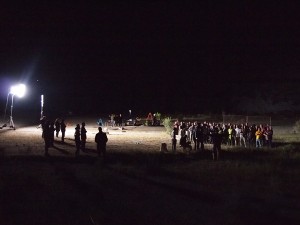 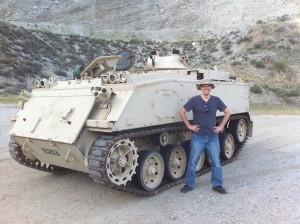 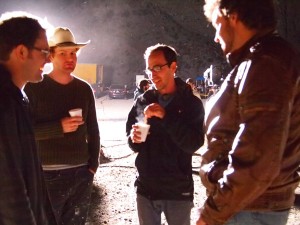