Just got back from Wizard World in Philadelphia. Got a picture with Ernie Hudson. Once in a lifetime chance to meet one of the Ghostbusters! He was really cool. 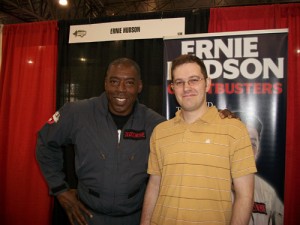 Funny as usual. He made fun of fans’ Evil Dead tattoos, gathered them all up on stage and had a contest. He told of how it’s a nightmare working with Sam Raimi and that anything he works on, chances are, he’ll have some kind of “stupid” cameo. But then went on to brag how empowering his cameos were in the Spiderman movies. In the first movie, he names Spiderman, in the second, he stops him from entering a building and in the third, he gives him advice. He finished by thanking the fans for supporting “alternative” cinema, because we need little independent movies as well as the 200 million dollar Transformer “piece of shit” franchises. Very true. Always entertaining is Bruce.

After catching the tail end of John de Lancie’s Q&A, (“Q” from Star Trek: The Next Generation) I made it in time for:

Funny and pleasant. Not intimidating like Bruce. Responding to many different questions about playing Data (Star Trek: TNG), he made it pretty clear that he’s done with the character. After appearing in a whole TV series and 4 feature films, he’s “satisfied” and happy with what he’s done for the role. Someone asked him about doing a prequel as Data. His response was “Look at me!” (in other words: unless he can reverse-age.) In episodes where he played multiple roles, such as Descent, he said he was glad to work with his favorite actor. (Himself) When asked if he had any advice for actors trying to make it in the business, he said that unless you feel like you have to, then don’t.

Hilarious as always. A bragfest about how he IS Batman. Even when asked if had a favorite actor who played Batman, other than himself, he said he hated all of them. He also mentioned how much of a pleasure it was to work with so many great actors like Burgess Meredith and Frank Gorshin. Questions came in from all across the board, about many non-Batman roles too. At one point, it got stuck in a Family Guy rut where everyone was just quoting lines from the show. That got kind of tiresome, but West had fun with it, laughing the whole time. Being in his presence is always a joy. He seemed to be holding back on some big secret and dropped a few hints that he will be involved in “something Batman” in the future.

Well that’s all I can report. Next stop, Los Angeles for E3. When I get back, a week from now, I’ll post my little personal film “The Dragon in my Dreams” the 21st, and the next Spike video is ready and tentatively scheduled for the 25th. After E3, I still have yet about 4 more conventions lined up in June/July. So I’m really wiped out. I’m hoping to get some work done on the next AVGN video at 30,000 feet up in the air, and in hotel rooms.