My favorite movie of all time is It’s a Mad Mad Mad Mad World. It’s essentially a treasure hunt about a group of people trying to find a stash of money buried under a “Big W”. The journey takes them to the fictional Santa Rosita state park, where they ultimately find the W exists in the trees. The general idea that everyone is searching for something resonated with me my whole life. It’s all about regular people who are dreaming of that unreachable fantasy. The archway entrance to the park was like the gates of heaven, but it was all in vain.

I’m 28 years old, but since I was only about 5, I remember wanting to find the Big W. Even though I knew it was only a movie and that there was no hidden treasure. All I wanted was to gaze upon those trees, or at least the ground where they once stood, and just think to myself “I made it.” It was just a little dream of mine and I always considered it the Holy Grail of movie sets.

While visiting Southern California, I decided to at least drive by and see if I could spot the one slanted tree from the road. 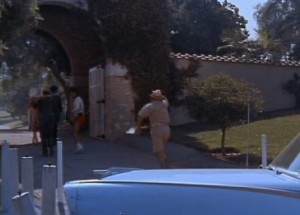 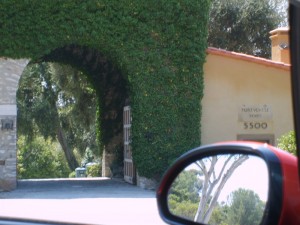 The picture on the left, from the movie, shows the characters running in, picks and shovels at hand. On the right, is my picture as my heart raced staring at the very same entrance, the mythical “Santa Rosita State Park” I knew so well. 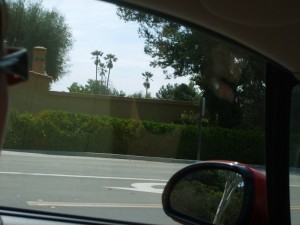 Many palm trees were visibile from the front of the property, but none looked like part of the Big W. I needed a better look, so I parked the car for only $5.00 at Abalone Cove, a nearby public park. I expected to get a distant glimpse, but there was actually a hiking trail which lead along the shore, behind the property, so I was able to get a solid view without tresspassing. Then I raised my arms and thought to myself “It’s a Big Dubya, I tell ya!” like Jonathan Winters in the movie. I was staring at my favorite movie location…period. 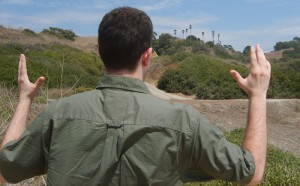 Of course, in the movie, they’re facing the sea, but I am on the opposite side, from the shore, facing back at the property. But were any of these trees a survivor from the Big W? I couldn’t tell. Everything was so overgrown, a faint reminder of how it once looked so majestic. It was like a lost utopia. 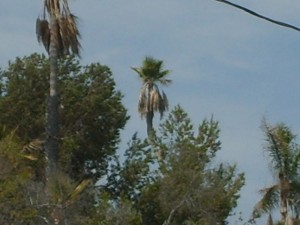 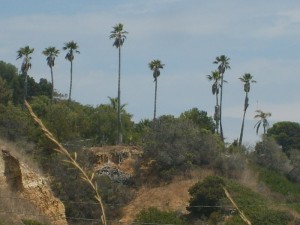 I managed to spot one tree, only visible from a certain angle, that appeared to be leaning over (above). It makes sense that a 45 year old palm tree that had been leaning, would continue growing upward. But the chance of it still standing seems pretty doubtful now. Though the documentary says the owners were planning on replanting the other trees, it doesn’t seem that way. My guess is that the Big W is all gone.

But I did manage to spot some neglected looking park benches. Could they have appeared in the movie?

I accomplished one of my childhood dreams. Just as the characters in the film, I went on my own treasure hunt to that same exact location. I can’t say I had as much trouble as they did. I didn’t get locked in a hardware store or left in control of a tiny airplane, but like in the movie, it was all in vain. Though it was very bittersweet, seeing there was nothing left, I still feel like I made a personal accomplishment. In my mind, the Big W still exists and so does the bumpy road to paradise.

I also explored other spots from the movie. Below is a street ramp in Santa Monica. This is a pivotal moment where the police captain Culpepper makes his decision to take the money and run. 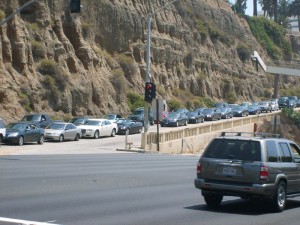 Knowing the final chase was filmed in Long Beach, I managed to spot an alleyway which might be where Spencer Tracy makes his getaway, climbing to the top of a building.

Of course, I always wanted to see the building where the climax takes place, but in reality it was a miniature. 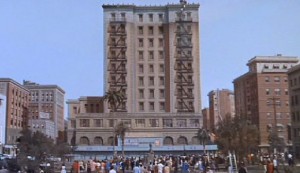 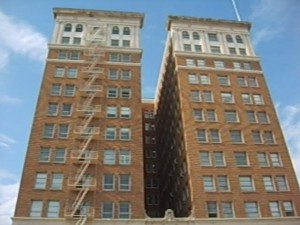 But more so, look at the movie still below! The building seems to appear in the background. Notice there’s only a fire escape on the left side. That can’t be a coincidence. 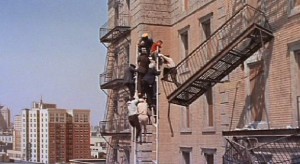 At last, I drove by Smiler’s Point, the spot where Smiler Grogan goes “sailing right out there!” It’s in the Palm Springs desert, on highway 74.

ABOVE: From the movie.
BELOW: My video still. 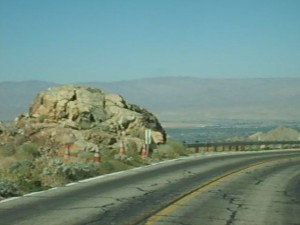 The ramp has been removed, the guard rail replaced, and the street repainted, but I was able to match the rock pattern. I found it somewhere around mile marker 89 or 90. I wanted to stop the car, get out and gaze down at the crash site. But it was very steep, and its a blind turn, so I would have risked getting run over by a car. It’s a dangerous spot, and I don’t recommend it.

That’s all. If there’s anyone out there who loves this movie as much as I do, I hope you enjoyed my little tour.