THE DVD SET IS OUT! Buy it on ScrewAttack.com 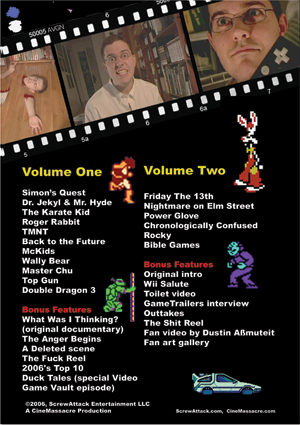 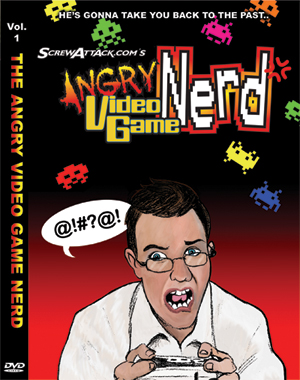 THE BAD NEWS - The movie clips used in the Back to the Future and Rocky reviews have been removed, as well as any other videos that had copyrighted content, including music. I know that may be disappointing, but it would be our ass getting sued. Not yours. The internet is one thing, but when you're selling it, it can be a different story. Just wanted to end that debate before it starts.

THE GOOD NEWS - To make up for anything that I removed from the videos, I put new stuff in! The Wally bear and Rocky videos have new endings! The Friday the 13th and Nightmare on Elm Street videos have a new original soundtrack by Justin Sobers (Zalai.com) and it sounds much better!

WHAT'S ON THE DVD's

* NOTE * I'd like people to know that the documentary is from January 2007, so comments expressed DO NOT reflect any current events.

NO NEW VIDEOS? - Many people are wondering why none of the videos from 2007 are included. Well, that's already 3 hours, 15 minutes worth of content right there. That INCLUDES BOTH DISCS TOTAL, COUNTING THE BONUS FEATURES. Yes, we are planning to release the new videos on DVD in the near future.